Metal Gear Solid 3: Snake Eater, abbreviated as MGS3, is a stealth action game directed by Hideo Kojima and developed by Konami Computer Entertainment Japan. This game marks the last canonical game in the Metal Gear Solid series. Metal Gear Solid games hold a special place in the hearts of avid gamers. Indeed, what makes this game stand out to many players is the way Hideo manages to incorporate the aspect of hope and tactfulness. In the darkness, there is light, and in times of danger, there is a need for calm.

This action-packed game is inspired by the happenings of the Cold War in 1964. The Snake, aided via radio by Major Zero, Para-Medic, and The Boss, is deployed to the jungles of the Soviet Union. Their mission is to rescue a renowned scientist by the name Sokolov who happens to be building an explosive nuclear tank called the “Shagohod.” The mission goes as planned until The Boss defects to Volkin’s camps, escaping with the Shagohod in the process.

The MGS3 can be described as a cold war-based stealth game. During the game, the player controls the main character, “Snake,” which is out to fight its main antagonist, “Volkin,” and all his operatives. The game places emphasis on the player’s ability to think and do everything within their means to survive.

The Metal Gear Solid 3 game, therefore, is a perfect example of tactical espionage. This means that you have to hide, seek, and fight your way through all manner of terrains, including mangroves, tropical jungles, swamps, forests, and sewers, among others. 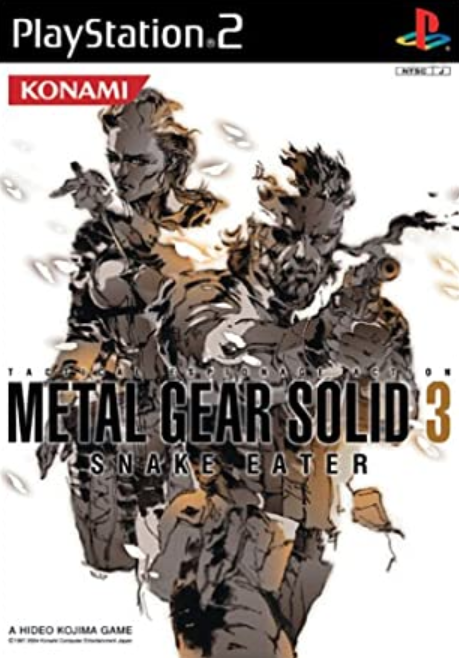 During gameplay, you also need to keep hunting for provisions from the haven of flora and fauna. Although Snake’s health will naturally replenish, you also need to ensure it does that optimally by keeping its stamina bar full. You can only do that by ensuring that it is well fed.

Part of the operation also requires that you have a cure menu. This essential feature allows you to keep Snake healthy. If Snake is wounded, after a vicious fight, the wounds are relatively easy to treat with the medical kit. And in case you have run out of medical supplies, your goal suddenly shifts towards the hunt for medical supplies.

The game features exceptional gaming mechanics such as footsteps, camouflage, distractions, and noise, among others. The mechanics of the game are unbelievably realistic, especially for a game that was developed more than a decade ago.

The MGS3 introductory scene is as epic as it can get. The game starts with a plane cutting through Pakistani skies headed to the Soviet Airspace. Onboard is Snake, awaiting to jump off the plane. Right after making the jump, the player is allowed to switch the panorama and enjoy the views.

As Snake descends, the game is momentary cut into a mission briefing to explain the situation. A few moments later, Snake lands in the forest and gets up before embarking on his mission.

Then Snake hits the ground running, out to rescue the defected Soviet scientist Sokolov. While there are many events in the game, some mark key defining moments of the game. That said, some standout gaming scenes in MGS3.

1. Betrayal on the Bridge

Symbolically, the bridge is often used to show a transition. But in MGS3, the bridge is an obstruction to Snake’s success. After a hard-worn fight that saw Snake rescue Sokolov, a scientist. The Boss, Snake’s partner, however, decides to defect to the Soviets, bringing Snake’s former allies with her. Snake is also thrown off the bridge, which marks his first failure and the start of the mission.

2. Survival of the Fittest

MCG3 takes place in a rough and natural environment full of traps, rugged paths, swamps, and forests. Snake has to rely on his survival skills to make it here. This means that he has to hunt for his own food, choose his camouflage, face paint for different situations, and organize his backpack. Notwithstanding, Snake has to tend to wounds and burn to realize his full potential.

A remarkable Boss battle, where Snake wades through a ghostly river while battling the spirits of the soldiers and animals that he killed during his earlier mission. Although he tries to fight the ghost, he is bound to lose this spiritual battle. And after dying, Snake takes a revival pill that sets him free from the eerie of this spiritual environment.

Snake then lands into the path of a legendary sniper who appears to be well over a hundred years old. However, his experience makes him a worthy opponent who you cannot afford to ignore. In this encounter, you have to kill the ‘old man.’ You can kill him early when he is still unsuspecting. Alternatively, you might opt to fight him in a one on one sniper battle, which can be a tough one.

If your shooting skills aren’t up there, you can use your thermal goggle and ambush him. Alternatively, you can abuse the fact that he is about to die and shut the game for a week and let him die of old age. Of course, the last option isn’t the best considering that it means staying away from the fun.

Having defeated Volgin and endured the Shagohod threat, all that remains is fight The Boss, Snake’s former ally and mentor. This battle takes place in a field. And since The Boss has the support of the Wing In Ground (WIGs), this battle turns out to be quite demanding for Snake. And when the battle nears its end, with Snake poised to win, the theme song heard during the early stages of the game is re-played.

This battle takes place in the Metal Gear, where there are both protagonists and antagonists. Just as Snake is about to escape after defeating The Boss, Ocelot forces his way into the WIGS, where he later puts up a fight. During their encounters, Ocelot admires Snake’s fighting skills. And after fighting for some time, Ocelots pokes Snake in the eyes and calls it quits. They part ways in a rather weird fashion after exchanging warm words and a smile.

The debriefing happens after Snake manages to oust his enemies successfully. This victory earns Snake the title of Big Boss, awarded by the president himself. To Snake, this victory is somewhat bitter, considering that he had to kill The Boss, who happened to be his cherished mentor. For his admiration for The Boss, Snake decided to visit her tombstone and place a bouquet.

Following the huge admiration of the game, MGS3 fans who fancy playing slots games can now play the Metal Gear Solid Series: Snake Eater Pachinko Slot from Konami featuring versions of scenes from the game in HD. Surprisingly, most famous cut scenes are made with cutting edge visuals, making them look a bit squawky. Previously for gaming consoles, recent developments saw it introduced in the Pachinko game, a popular Japanese slots machine variant.

To play this game, all you need is to match up the symbols to deal damage to Ocelot. If you have played online slots games before, then the MGS3: Snake Eater Pachinko game should be a no brainer.

Undoubtedly, there are many great things to say about MGS3. The incredible plot and attention to detail make this game a beloved classic to many.